HIDDEN amidst the maze of trunk roads in Perak is a single main road riddled with potholes and sandwiched between derelict and crumbling structures. Welcome to Kampung Papan. To those who notice this place at all, it’s a random curiosity, a beacon without context.

It betrays no indication of a town that once teemed with people who sought their fortunes in this former tin mining hub. A place that traced the trails forged by early pioneers and augured the future of industrialisation in this country. The three “blind hikers”, with Aziff on the extreme right.

For Aziff Azuddin and his band of intrepid travellers, it’s yet another hidden page they had stumbled across in a country of paradoxes; of bright and glittery cities that co-exist with quiet nondescript towns and of a melting pot of races that have somehow learnt to weather deep cultural differences to forge a formidable nation.

This is Malaysia, where a plethora of new experiences, untold stories and a dizzying array of colours are bound together by an aching familiarity for those of us who call her home.

“We take for granted what’s right in front of us,” he writes in his book Why I Travel, a compendium of stories, experiences and a diary of sorts documenting his Malaysian adventure. “Communities have narratives and histories that enrich, if not provide identity to these destinations.”

Why I Travel seeks to unearth those stories and uncover the secrets of the local landscape. Throwing together a playlist, some travel essentials and a motley group of friends with a thirst for adventure, Aziff takes us on a voyeuristic trip across Peninsular Malaysia — from witnessing an exorcism at a mosque in Subang to exploring remote towns and fraternising with local communities — to touch “… the very real and tangible lives of Malaysians”.

For Aziff, sometimes life-changing adventures can occur in the unlikeliest of places.

TRAVELLING BACK IN TIME

Putting his finger on the very heartbeat of Malaysia — her people, culture and places — is intrinsically linked to Aziff’s deep connection and romanticism attached to the country’s past. He attributes it to his grandfather, the late Tan Sri Abdul Rahman Jalal, who was involved in the early nation-building years of the country.

“My grandfather was the quintessential traveller,” he recalls of the distinguished statesman who had joined the Malayan Civil Service in 1954. Following Malaysia’s independence, he opted for the country’s newly-established Foreign and Diplomatic Service before finally retiring as ambassador in 1985.

Influenced by the simplest and most unexamined images of happiness, Aziff remembers growing up listening to his grandfather’s stories and adventures living abroad. “His dazzling stories inspired me to travel the world on my own,” he confides.

“My grandfather loved going off on unplanned trips and there were afternoons where we’d discover he’d disappeared, only to see him come back much later after yet another trip off the grid!” he recalls fondly, adding with a laugh that the elderly adventurer would sometimes arrive back with his car boot filled with fruits after chancing upon a random orchard during one of his well-known escapades. “It was just like him to take off suddenly and come back laden with knick-knacks, food and an interesting tale or two. Retirement hadn’t quenched my grandfather’s thirst for adventure at all,” he adds.

That and his childhood memories of the annual family exodus during Aidilfitri down south to Johor (set against the soundtrack of ABBA’s Greatest Hits — his grandmother’s favourite) built his taste for travel. “As a child you don’t remember much beyond the food and other sights. This is why in the earlier years of my life, like many people my age, I wanted to embark on a voyage of self-discovery, to see the world beyond the boundaries and travel to faraway lands,” he admits.

Not long after, a trip to the ancient city of Chiang Mai got Aziff examining himself while feeling the tug to rediscover his roots. “I met with backpackers, expatriates and tourists, all of whom were tired of life at home and had travelled halfway across the world to find themselves in this place. It was then I realised the absurdity of travelling so far away to find meaning within myself,” he writes in his book, recounting that upon returning home, he set out to get to know Malaysia, bringing with him “… no expectations, no itinerary — just wide-eyed wonder, a notebook and a mixtape for atmosphere.” HAVE FRIENDS, WILL TRAVEL

For all Malaysia’s myriad natural wonders, colourful culture and mesmerising landscapes, it’s the people who are the real highlight. Malaysians are known to hold a certain je ne sais quoi with their warmth and hospitality, says Aziff.

“What I love most about this country is the fact that I can go and have a meal in a stall, strike a conversation with someone and that person would be more than willing to share their culture and heritage.”

From 69-year-old Madam Foo May Chan, proprietor of a coffee shop in the ghost town of Kampung Papan to Abang Man, one of the few remaining boat makers in Pulau Duyong, we meet some of the country’s interesting, if not charming, characters through his book.

“When I returned to explore Peninsular Malaysia, it was a journey I undertook to find the side of Malaysia that most people overlooked. In a nation fissured by racism and messy politics, there seem to be fewer and fewer moments of genuine encounters. I went in search of that, going around meeting different communities and getting to know a different Malaysia I was familiar with while growing up,” he says softly,

Oft times, the 29-year-old former journalist didn’t embark on his travel adventures alone. “We called ourselves the ‘Blind Hikers’,” says Aziff of his motley group comprising his two former university housemates, Adi Abdue, Asyraf Naqiuddin and himself, “… simply because we travelled blindly, relying on pure chance for most of our trips!

“We used to travel every other month. Unplanned road trips took us to interesting places based on the recommendations of locals,” he discloses, telling me with a laugh stories of their many foibles including the time when they tried driving their sedan through an oil palm plantation with tyres threatening to burst at any given moment in search of an isolated river called Sungai Rengat.

“We drove gingerly through a road of sharp stones at snail’s pace while local motorcycles and jeeps whizzed past us leaving behind a choking trail of dust!” he recounts, chuckling.

The trio traversed the course of the Peninsular, exploring caves (Gua Kota Gelanggi, Gua Tempurung), camping by the Chilling waterfalls in Pahang, exploring the abandoned refineries of Bukit Besi… adventures which have somehow left an indelible mark. “While driving down those long highways back home at the end of every adventure, something inside would gnaw at us: we have changed …somehow,” writes Aziff in a chapter dedicated to his fellow adventurers. 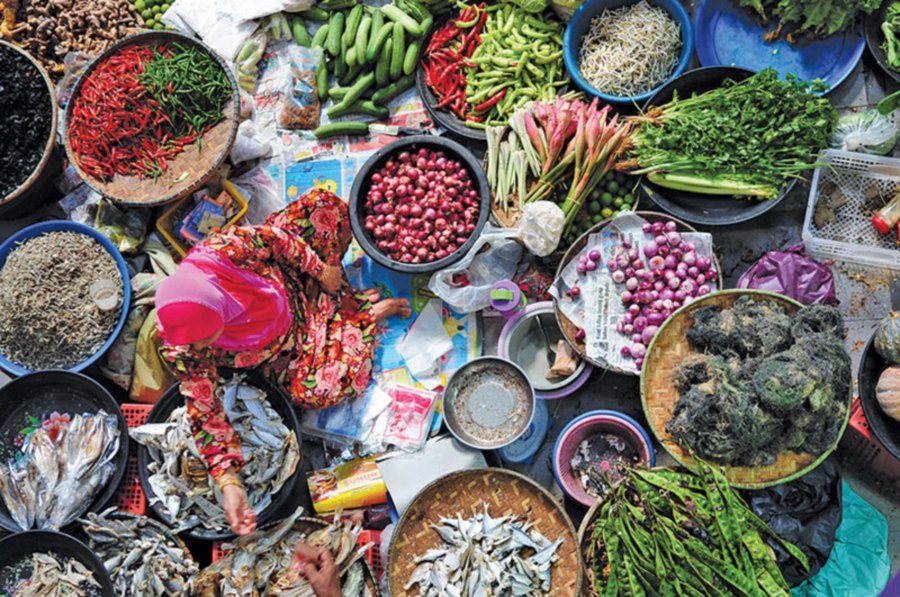 The colourful Pasar Siti Khadijah in Kelantan where womenfolk dominate the market.

The book isn’t in any particular chronology. Rather, it’s more of a collection of stories and memories, Aziff explains. “The order was driven by my emotional journey in writing the book’s adventures. I’m hoping the readers will ride along with those waves.”

And the emotions are there. The reverberating sound of the nadaswaram (a traditional wind instrument) in a temple in Malacca as a young Chetti man marries his Chinese bride in a flurry of colours and sound; the bustle of the Siti Khadijah Market where womenfolk dominate the market; an afternoon with an ethnobotanist who gave up Paris for a life in Pulau Duyong where she blithely tells him: “I did not adapt, they (the people of the island) adapted to me…”; meeting the legendary craftsmen of traditional wau (kites) and boats; and upholding the quintessential British tradition of piping hot tea and scones up in the former colonial outpost of Frasers Hill.

There’s purity in the remembrance of these places and people; and in his book, these are allowed to stand out. Abang Man, one of the few remaining boatmakers in Pulau Duyong, Terengganu.

Based in the UK where he’s now pursuing a post-graduate masters in sociology, Aziff confesses that he misses Malaysia tremendously. “In recent times, I’ve felt that call more keenly than ever. There’s something about this country that draws you back. Once I’m done, I want to come back home,” he confides.

Home lies in the most complex, contradictory place of constant exuberance amidst skyscrapers, dilapidated towns and beautiful natural vistas. As long as you’re willing to bring with you a little perspective and the willingness to learn, there’ll always be something to discover about this country we call home. And love. How does an ageing community die out? Is Pahang’s best ikan patin really in Temerloh? And why would a Frenchwoman be at all interested in migrating to a remote boat building village in Terengganu?

Why I Travel is young journalist Aziff Azuddin’s impressions of an undiscovered side of his country. It’s an exploration of caves, fishing islands and antique markets and meeting the individuals and communities that complete this national tapestry called Malaysia.